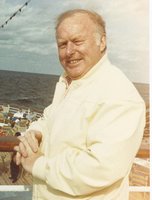 Robert F. Slater Sr. of Rye, NY passed away on February 12, 2017. He was born on June 28, 1931, the son of George and Irene Burns Slater. Robert’s career as a Rye City Fireman spanned over 30 years including as Captain of Engine and Hose and continued as a Rye City volunteer. Bob also was owner of Bob’s Delivery Service, Over the Bridge Tavern and Rye Refuse Service with partner Robert Billington. He was an active member of the Rye Hunters Club. Together with his wife of 67 years, the former Lee Neilson, they raised their three children. He is survived by his wife Lee, children: Diane Johansson, Robert (Debra) Slater and Richard (Paula) Slater, six grandchildren: Jessica, Jamie, Robert, Emma, Amber and Hannah, four great grandchildren: Ali, Courtney, Morgan and Riely, and four siblings: Mary, Vincent, Harold and Mickey. He was predeceased by three siblings: Winifred, Jimmy and George. The family will receive friends at the Graham Funeral Home on Wednesday February 15, 2017 form 4 PM to 7:30 PM. A mass of Christian Burial will be celebrated at the Church of the Resurrection on Thursday at 11 AM. In lieu of flowers donations may be made in his memory to St. Jude Children’s Hospital.