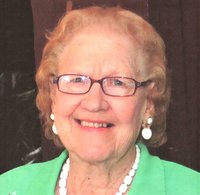 Mrs. Jean Faszewski (nee Jadezuk) passed away on March 3, 2018 in Greenwich Hospital after a short illness.  Born in Buffalo, NY on April 29, 1921, Jean was a 69-year resident of Rye. She worked as a professional companion to the rich and famous in Rye and Greenwich, CT.  Jean was an active member in the Rye community serving in the Catholic Daughter’s of America, the Rye Ladies Auxiliary of the RFD, Friends of Rye Town Park and the St. Monica’s Mothers Club.

The two loves of her life were her family and her garden.  She married Edward Faszewski on April 27, 1941. He passed away in 1992.

The family will receive friends at the Graham Funeral Home on Friday March 9, 2018 from 2-4 PM and 7-9 PM.  A of Mass Christian Burial will be celebrated at the Church of the Resurrection on Saturday at 10 AM.  Donations may be made in her memory to the Friends of Rye Town Park, the Rye PBA or the Rye Fire Dept.