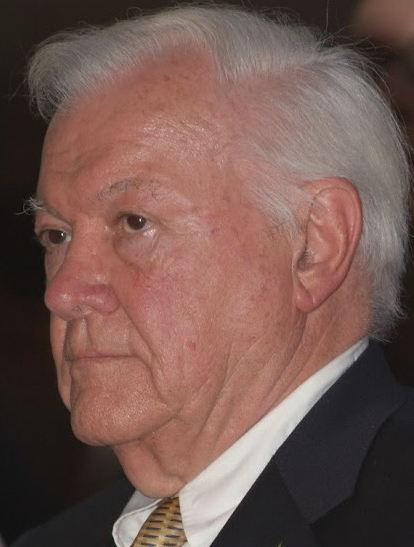 Robert George Hueffed, Sr. died peacefully on May 24, 2020. He was just shy of his 90th birthday. Robert (Bob) was born in Cleveland, Ohio to Angela Kundtz and Perce G. Hueffed in 1930. He graduated from Cleveland’s St. Ignatius High School in 1948, and studied engineering at Case Western Reserve University graduating with a Bachelor of Science in 1952. Bob served for eight years in the Naval Air Reserve at Floyd Bennett Field in New York. In 1952, Bob married the love of his life, Jean Marie Draddy. Over 68 years of marriage, they lived a loving and fun-filled life together, most of which was spent in Rye, New York. They had four children. Bob was a Renaissance man. He had the mind of an aerospace engineer, the soul of a sailor, the heart of a true friend, and was always willing to talk to anybody about anything, preferably over an ice cold beer. Bob’s greatest pride was working the coolant and filtration systems of the Apollo capsule and the LEM lunar lander, and though Bob was trained and worked as an engineer — Ingersoll Rand, United Aircraft, Budd Corporation, Pall Corporation, Central Dynamics and Hueffed-Bath Marketing — he followed in the footsteps of his famous grandfather, Theodor Kundtz, in his mastery of woodworking and wood carving. He was also an avid nature photographer documenting his many travels to Europe, with a particular fondness for the mountains of Switzerland. For recreation Bob loved sailing, especially the rigors of racing sailboats. For many years, he managed the Sunfish fleet out of Westchester Country Club in Rye, New York, and then graduated to racing his beloved Sonar, Aboutime, out of American Yacht Club also in Rye, New York. Bob is survived by his wife Jean Marie Draddy, his son Robert George Hueffed, Jr. and his three beautiful daughters, Lynn Joan Hueffed, Krista Hueffed Stanley (Mark), and Jane Michelle Hueffed O’Brien (Gene). He is also survived by eight grandchildren: Eric Hanson (Megan), Kara Hanson, and Jason Hanson (Staci); Piper Hueffed Kotwica (Randal), Amber Hueffed Miller (Brad) and Robert G. Hueffed III (Mary); and Aaron Stanley (Jenny) and Jessy Stanley. Bob is also survived by nine great-grandchildren: Max, Clare, Mary, Zèlie, Stanley, Peter and Vald Kotwica; Connor Hanson; and Lucy Hanson. In this most unusual of times with the coronavirus, the family will forego a visitation and church service. Bob will be interred at Greenwood Union Cemetery in Rye, New York. Once gatherings become manageable the family intends to hold a memorial service for Bob at Resurrection Church in Rye, New York. Donations in Bob’s name can be made to St. Ignatius Cleveland Annual Fund https://www.ignatius.edu/give/give_now.