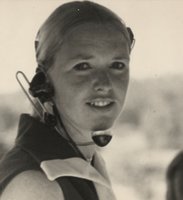 Katharine “Karan” Donahue Whamond, 77 years old, left us too soon on June 20, 2020. Known as “Bama” to her grandchildren, Karan was born in Bronxville, NY in 1943, the first child of Frank and Kay Donahue. This extraordinary dedicated wife, mother, sister, aunt, grandmother, great-grandmother, friend and volunteer lived most of her life in Rye, NY. As the eldest of eight children, she was a second mom to her younger siblings. A graduate of the Convent of the Sacred Heart in Greenwich, CT, Karan earned her Associates Degree at Duchesne College in NY before starting work as a 4th grade teacher at Resurrection Grammar School in Rye at the ripe old age of 19. Not long after, Karan started volunteering at a local golf tournament commonly known as the Westchester Classic. For the next 50+ years, every volunteer at this event and most of the PGA tour professionals witnessed Karan’s innate organizational and management skills as the Tournament Director, overseeing hundreds of volunteers. The National PGA recognized Karan’s half-century of dedication with the PGA’s Volunteer of the Year Award in 2016. You’d be mistaken, however, if you thought Karan loved playing golf. She never played a round in her life. Her passion for volunteering stemmed from the great local causes that benefitted from the golf tournament’s proceeds, most notably United Hospital in Port Chester, NY. Never one to sit on the sidelines, Karan’s direct volunteer efforts at United Hospital culminated in her serving nearly a decade on the hospital’s Board of Managers. She mourned the hospital’s closing in 2004 and the impact that its loss would have on the community. Karan turned her charitable spirit towards other local causes, such as the Port Chester Ambulance Corps and the Carver Center in Port Chester, NY. Karan’s many volunteer efforts contributed to the Convent of the Sacred Heart awarding Karan its alumna of the year award. Concurrent with Karan’s many volunteer efforts, she met the love of her life, Donald Whamond, Jr. The two married in 1966 and were a formidable duo for 53+ years, playing, praying and raising four children together. When not working as the office manager at the family owned marina, Karan naturally immersed herself in leadership roles for her children’s activities, including running girl scout groups and cub scout dens and teaching religious education for their CCD classes. Karan was also the “adoptive” mother of all of her children’s friends, welcoming them into her home like one of her own. Karan is survived by: her loving husband Donald; her siblings F. Michael Donahue, Teresa Keister, Peter Donahue and Mark Donahue; her children and children in-law Donald III and Dana Whamond, Michael and Mary-Courtney Whamond, Haley and Stephen Brown and Tim Whamond; her grandchildren Samantha Terkelsen, Katharine Brown, Patrick Whamond, Jack Whamond and Susie Whamond; and her great granddaughter and the star of family Zoom calls, Amelia Rose Terkelsen. Karan is reunited in heaven with: her parents; her siblings Christina Sherf, William Donahue and Steven Donahue; and her son John Whamond. A private funeral mass will be held for Karan at The Church of the Resurrection in Rye at 11 A.M. on Thursday, June 25. The family regrets that, due to protective COVID-19 restrictions, they are unable to have a funeral mass open to the general public. Resurrection will livestream the mass. Please click on the link to the left to watch the mass. In lieu of flowers, donations can be made in Karan’s name to the Carver Center in Port Chester, NY. https://carvercenter.org/donate/