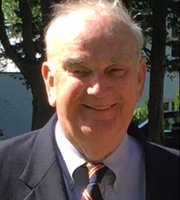 James “Jim” Finegan passed away peacefully at his home in Rye, NY on September 19, 2020. Jim was born on May 26, 1937 to James Finegan and Mary Howard Finegan in the Throgs Neck neighborhood of the Bronx where he grew up and attended St. Francis DeChantel, St. Helena’s High School and SUNY Maritime at Fort Schuyler. In 1960, he joined the FDNY and served a 16-year career for Ladder Company 48 in Hunts Point (Bronx) where he received many citations including the Red Cross CPR medal, and the Emerald Society Medal working his way up to Lieutenant and retiring in 1976. He then quickly became a successful salesman, first working for Brooks Instruments before starting his own business, Northeast Technical Sales. Jim married Barbara Ritchie in 1959. They moved to Rye in 1963 where he engaged with the community as a member of the Rye Volunteer Firemen, the President of the Rye Little League, and a devout parishioner at Church of the Resurrection. Jim was a longtime member of the Coveleigh Club where he served on the Board of Governors and was an avid tennis and paddle player. A big sports fan, Jim tediously followed the Yankees and NY Jets for decades and as his grandchildren started to play sports themselves, he travelled around Westchester and Fairfield Counties cheering them on. He was a history buff and trivia king, always diving deep into books, and testing his grandchildren (and anyone around him, really) on their ability to keep up with him. Jim was always known for his quick wit and was loved and admired by all who knew him. A devoted father & grandfather, “Big Jim”, “Coach,” or “Pop” as he was known in his later years, is survived by a brother, Howard, of Rockville Center, Long Island, and several nieces and nephews. Four children: James (Wanda), William, and his 2 children, Kathryn Charlotte, William Trey and stepson Peter Kweskin, Kathleen, husband Edward Fitzwilliam, and their 3 children, Molly, Mikaela and Madeline, Thomas, wife Suzy and their 2 children Thomas J and Matthew. A Mass to celebrate his life will be held on Friday September 25, at 10:00 am at Resurrection Church Rye, New York. The mass will be available on livestream for those who can not attend in person. Jim will be buried at Gate of Heaven Cemetery alongside his parents and other family members. . In lieu of flowers please send donations to Rye Volunteer Firefighter’s Association PO Box 1 Rye, NY 10580. In memory of James Finegan. To view the funeral mass via livestream, click on the link to the left or from a smart phone scroll down on the obituary page to the live stream link. (Please note this link will not be active until Friday morning).