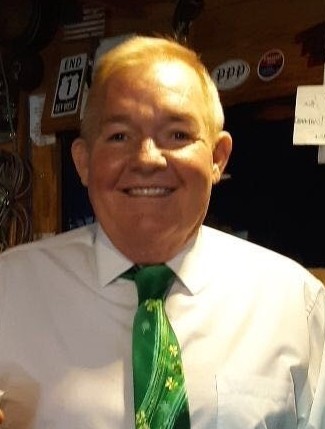 Franklin “Zugi” Byrne, born January 16, 1954 in Peter Cooper Village New, York, New York, passed away peacefully at home on Tuesday October 20th 2020. Born to his mother Charlotte, and father Peter he lived in Rye for most of his life. He attended Midland elementary schools, and graduated Rye High School in the class of 1972. He earned his BA in Finance from Pace University in 1992. Frank spent his life serving smiles and drinks, expending unlimited love into everyone he met. Everyone knew him as Zugi, a nickname that stuck from a childhood job at Larry’s Market. Zugi was so much more than a bartender; he was everyone’s best friend, a guaranteed laugh, and someone you could count on for anything. Zugi started his bartending career at Mug and Ale; working with Finn. But it was at The Pub in Rye, NY where his legendary status became noteworthy. He went on to Kelly’s Sea Level, with the McGuire family where he worked for the past 34 years. It was at Rye’s Pub that Frank met his wife Linda, a marriage that spanned 33 years and started a beautiful family. His son, Jimmy and daughter, Grace, were his absolute world. Nothing made Frank happier than loving his family and sharing good times with those he cared about. In addition to Linda, Jimmy, and Grace he is survived by two brothers and a sister, Peter, Wes, and Charlotte, additionally he leaves behind his beloved mother in law Ann Coughlin and several nieces and nephews; who will miss him dearly. Equally as important to Frank were the countless treasured friends he valued as family. High spirits and hefty laughs were abundant whenever you were around Frank. Frank lived for his trips with friends. Zugi was the type of guy who spent days curating “material,” to keep his buddies laughing on all of their adventures, nothing was more important to him than making everything a good time. Because of CDC guidelines for CoVid-19, a service of the proper magnitude is not possible right now. A celebration of his tremendous life will be held at a later date. A wake will be held at Graham’s funeral home, Tuesday October 27, 2020 from 4pm-8pm. A private Funeral Service will be held, at a limited capacity, in Christ’s Episcopal Church in Rye Friday October 30, 2020 at 10am. Everyone can watch the service via live stream, and all are welcomed to his burial at Greenwood Union Cemetery, immediately following his funeral. Please wear a mask, and practice social distancing.