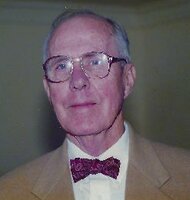 George John Zahringer, Jr., known as Jack, passed away peacefully in his sleep on October 5th, 2022, after a full and glorious life of 100 years. He is survived by his loving and devoted wife of 71 years, Rosemary Duncan Zahringer. He is preceded in death by his father and mother, Mary Bernice (Croarkin) and George John Zahringer, Sr., and his sisters Lee Ann Stine, Mary Lou Mitchell, and Jean Burke.

Born July 18th, 1922, in Naperville, Illinois, Jack grew up in a well-known and respected family. Equally enthusiastic assisting at mass as an altar boy or leading his troop as an Eagle Scout, Jack’s youth presaged the qualities that would characterize his life—a life of energy, activity, centered on faith, family, friends, and civic duty.

Jack matriculated at Northwestern University as a member of the class of 1947. He would go on to bleed purple for the rest of his life. His collegiate experience was formative, and later in life he would happily recount in fondness to family and friends alike tales of his campus glory days, cheering on the Wildcats as freshman football manager in “dirty-white bucs,” the epitome of studied casualness. A diligent student, Jack earned a Bachelor’s Degree in Chemistry. He would also serve as Yearbook Manager and pledge the Delta Tau Delta fraternity, a source of long-lasting friendships.

His undergraduate years were interrupted by World War II. Commissioned as a Lieutenant in the U.S. Army, Jack’s military service would see him sent to Georgia Tech for further education by the Army Corps of Engineers. After the war, Jack attended Harvard Business School, class of 1948, on the G.I. Bill, where he would earn a Master’s in Business Administration and forge further friendships that spanned the decades.

Jack met his future beautiful wife Rosemary, whom he affectionately called Roso, in Chicago and they were wed in 1951 at St. Malachy in Creston, Iowa. His working life saw him in a long, successful career in chemical engineering. He would go on to start his own marketing firm. In his “retirement” career, he worked with Jed Dolce in real estate.

A celebrated Rye resident since 1966, Jack was a civic-minded citizen and selflessly gave his time and energy to the community. He was a loyal Lions Club and Rotary Club member, joined the Rye Board of Architectural Review, and would chair the Rye Landmarks Committee well into his 10th decade. A life-long student of history, he would work to protect Rye’s historical integrity, a task that included restoring Rye’s three Boston Post Road mile-markers, fixed by Benjamin Franklin himself in 1763. For his indefatigable efforts as protector of Rye’s history and recognizing his storehouse of local knowledge, Jack at age 98 received the Mayor John Carey Merit Award, presented to a Rye resident who has “made meaningful contributions to public life in the City of Rye for an extended period.”

In addition to his love of college football, Jack was an avid sports enthusiast himself. A past member of the Westchester Country Club and a current member of the American Yacht Club, he played golf, squash, and successfully drop-shotted his grandchildren on the tennis court into his late eighties.

The last of the Greatest Generation, in a life that bridged two centuries, Jack personified those values of personal responsibility, duty, honor, and faith that had been instilled in him from youth.

A Mass of Christian Burial at the Church of the Resurrection, Rye, NY, will be announced at a future date.