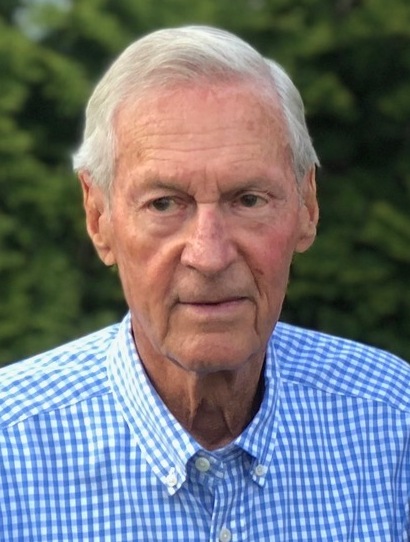 Robert Minicus (Bob), 91, passed away on October 21, 2022, with the love of his life, Norma by his side.  Bob was born May 2, 1931, in Bronxville, NY to George and Anna McAuliffe Minicus, and was predeceased by his brothers George and John.

Bob is survived by his wife of 68 years, Norma, and by his four children Richard Minicus (Jennifer), Pamela Virtue (Doug), Robert Minicus Jr (Bridgette), and Kevin Minicus (Maureen).  In addition, he is survived by his twelve grandchildren Kim (Brian), David “DJ” (Liz), Kristie (Dave), Clay (Roxanna), Tori (Shane), Colin, Andrea, Brian, John, Max, Michael and Matthew.  In recent years, he and Norma welcomed three great grandchildren into their lives, Kate, Jack and Tommy.  In addition, Bob is survived by many nieces and nephews and friends from Armonk, NY, where he and Norma resided for 58 years, as well as friends from the Stanwich Club in Connecticut, and the Jonathan’s Landing Club in Jupiter FL.

Bob graduated from Roosevelt High School in Yonkers, NY where he was a standout pitcher on the baseball team. There, he also met his future wife, Norma.  He followed that with a degree in Journalism from Rutgers University.  Bob proudly served as a First Lieutenant and Captain in the US Air Force after college and married Norma on July 11, 1954.  They both spent some time stationed in Tripoli, North Africa before Bob returned to a multi-decade career as an advertising executive in NY.  Bob spent considerable time in the creative departments of J. Walter Thompson and Saatchi and Saatchi Compton and later served as Creative Director of Cunningham & Walsh where they won Agency of The Year.  Bob helped to create many ad campaigns that might sound familiar including “The best part of waking up is Folgers in your cup” as well as "Only in a Jeep”, and "Kawasaki lets the good times roll".  These indeed were good times and provided many memories for him as well as his family.  Later in his career he branched out on his own with Minicus & Linder and then RGM marketing, which served local Connecticut companies with marketing and ad services.

Bob was extremely proud of his large family and spent considerable time supporting his children and grandchildren in all of their endeavors.  He was an avid sports fan, particularly a fan of the Yankees and the Giants, but he had the most fun on the sidelines with Norma supporting his children and grandchildren.  Together they attended countless athletic events.  He was passionate about politics and policy and loved to dabble in the stock markets and would always share his favorite picks with us.  Bob was an avid golfer.  He had many friends at the Stanwich Club where he played most weekends and would gladly take any winter day where there was not snow on the course and meet up with his buddies.  He carried his own bag around the course until he was 88 years old!  Lately, he enjoyed playing golf with Norma at Jonathan’s Landing in Florida and loved it when his children would come down to visit and play.  His house was always open.  Bob and Norma also enjoyed annual summer visits to Martha’s Vineyard with extended family.

Norma and the family will receive friends at the Graham Funeral Home, 1036 Boston Post Rd, Rye, NY from 4:00 PM to 8:00 PM on Thursday October 27th, followed by a Funeral Mass at 10AM on Friday October 28th at Our Lady of Sorrows, 920 Mamaroneck Ave, White Plains, NY.  In lieu of flowers, please consider a donation in Bob’s honor to The First Tee - Connecticut, 55 Golf Club Road, Cromwell, CT 06416 or www.firstteeconnecticut.org