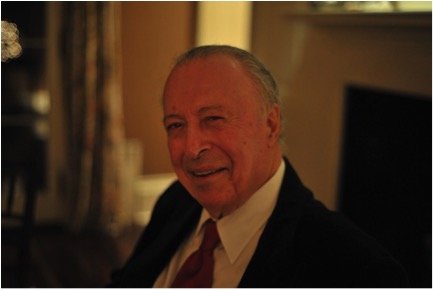 A longtime resident of Rye, NY died peacefully Saturday, May 13th with his beloved wife Claudia and children by his side. George was born in New York City on April 25th, 1926. His early years were spent in Pinehurst, NC. He fondly remembered attending Miss Chapman’s one room schoolhouse in Pinehurst before leaving for  The Fessenden School. He graduated from The Taft School, and after serving in the Army during WWII, Williams College. George was a loyal Williams alumnus and took great pride in being amongst “the stubborn survivors of the class of ’50.” After receiving his business degree at NYU Stern School, George joined Razook’s, a designer women’s clothing chain located at the Plaza Hotel, NY, Breakers Hotel, Palm Beach, Lake Placid Club, NY and Pinehurst, NC. As president, he expanded the footprint of the company his parents founded and moved headquarters to Greenwich, CT in the 60’s. The company thrived under his leadership, and was  noted by Time magazine as having been used in a superior court case to define luxury retail.

George enjoyed the camaraderie of golf as much as the game itself. He first held a golf club in Pinehurst at the age of three, and in later years swore by his putter named “magic.” His years in the US Seniors’ Golf Association were a great source of happiness. He was a member of the Apawamis Club, American Yacht Club, John’s Island Club, and the Lake Placid Club. From the first summer of his life until almost his last, George  spent summers in  Lake  Placid,  and the  lifelong family  friendships made there were among his most treasured. His years at Camp Dudley became an honored tradition for his son Bradley, grandsons, and his daughter Lauren.

George loved to dance; at the Stork Club or Palladium, at parties, weddings or “Club 50,” one would find him with Claudia on the dance floor having a ball. One of the great joys of his extraordinarily happy 64 -year marriage to Claudia was their  shared morning “Tex and Jinx” breakfast. They were best friends and never tired of each other’s company. He was an optimist, and took great care to convey that attitude to his children and grandchildren. He would often say “demand good luck” and he received it in volumes. His friends thought him the best of friends, he was a cherished husband and father, and his eight grandsons adored him as the best of grandfathers. He is survived by his beloved wife Claudia, his children Leslie (Hans Eschricht), Bradley (Mary Jo) and Lauren (John Roth), grandsons George (Christina), Charlie, Christopher and Harry Razook, Nicholas, Peter and William Roth, Henry Eschricht, and his sisters, Jacqueline Chamandy and Renee Dunne.

A service in celebration of his life will be held at Christ’s Church in Rye, NY at 3 PM on Wednesday May 31st, immediately followed by a reception at American Yacht Club. There will be a memorial service in Lake Placid, NY later in the summer. Donations in memory of George may be sent to Camp Dudley, 126 Dudley Road, Westport, NY 12993 or in lieu, root for the NY Giants.

Share Your Memory of
George
Upload Your Memory View All Memories
Be the first to upload a memory!
Share A Memory
Send Flowers