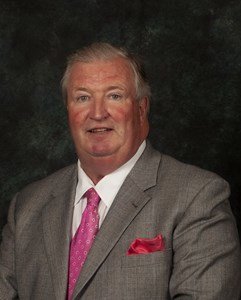 William Peter Hendry, age 67, passed away peacefully on Thursday September 28th 2017. Humble, modest, selfless, honest, loyal, and unpretentious. A man of his word, beloved by so many.

Born on Thursday March 23, 1950 in Glasgow Scotland, Bill was the eldest child of his late parents Thomas Hendry, a coal miner, and Norah Coll Hendry a grocer during the Second World War, humbly of Scottish and Irish descent. Bill was a longtime resident of Rye NY, proudly becoming a US Citizen in 2004.

Bill dearly loved, and was loved by, his family whom he was devoted to. When not with them he spoke of them at length, with great pride and affection. He is survived by the love of his life, Louise. They began dating at the age of 17 and celebrated their 45th wedding anniversary together this past July.

He sadly leaves behind his adoring children Jennifer Hendry Cunniffe, Thomas Hendry and Laura Hendry Costello along with their spouses Casey Cunniffe, Anna Hendry and Chris Costello, whom he loved as his own.

Bill’s finest joy and proudest achievement was his seven grandchildren, Finn William, Kiera Jude, Isla Grace, Dermott Fisher, Fianna Louise, William Bear and Grace Gemmell. He was a doting “Granda” particularly enjoying the routine everyday moments shared when taking them to school, swim meets, dance recitals, soccer matches, and secret trips to the candy or toy store. He marveled in even the simplest of their accomplishments, beaming with happiness.

He is survived by his beloved sisters Rosemary Hendry and Grace Hendry Nash and their spouses, John Fegan and Gerry Nash of Glasgow Scotland, his lifelong friend and Brother John Corr and countless nieces and nephews who cherished their Uncle Billy.

A brilliant mind and gentleman, Bill enjoyed an exceptional career in finance, spanning 50 years this past May. He held senior banking positions in Scotland, Northern Ireland, Canada, the Middle East, Africa and the United States. Bill spent 42 years at the Bank of Scotland, starting his career at the age of 17 as a bank teller in Glasgow and retiring as Chief Executive North America in 2009. He had extensive experience in mergers and acquisitions, most notably at Drive Financial Services, where he led HBOS plc’s investment analysis group before becoming Chairman in 2000. His love of family extended to all colleagues. He was a tireless mentor who impacted both the professional and personal lives of all he worked with. As Chief Executive Bill is fondly remembered for walking the Bank of Scotland floor each morning to personally wish all a good day with a warm smile and genuine interest for their wellbeing.

Post retirement Bill continued an active and successful professional life. He launched W.P. Hendry and Associates in 2009, a bank consulting firm that handles complex business and lending issues. He was the Chairman of First City Financial from 2011 to 2013 and Chairman of Pharma-Cycle LLC. He was an Independent Director at Santander Consumer USA along with three public investment companies managed by The Carlyle Group, in addition to Special Adviser to Promethean Investments based in London.

Bill was kind in spirit and in action. A devout Catholic with a deep faith in God, he was active in many charitable endeavors including a longstanding supporter of the Celtic Football Club’s Foundation and serving on the Board of The Salvation Army. His generosity expanded beyond his charitable work and included countless efforts to help and support family, friends, colleagues and strangers in all matters great and small.

His three great loves where his family, his faith and his football. Everyone who met Bill, whether in a professional or personal capacity, knew instantly the he was a Glasgow Celtic supporter, faithful through and through. His connection with and commitment to Celtic grew stronger throughout his life and included going to several games a year at Celtic Park in Glasgow in addition to traveling to see them play internationally. If not attending games he made sure to support his treasured Hoops watching every game with his wife, children and grandchildren sharing in his enthusiasm and cheering by his side.

Bill lived every day with a voracious love and contagious laugh which will be sorely missed. He leaves behind a legacy of the utmost heartfelt values which his children and grandchildren will carry on in his memory to the next generation.

The family will receive friends at Graham Funeral Home in Rye from 4pm to 8pm on Thursday October 5th. Mass of Christian Burial will be celebrated at 10am at the Church of the Resurrection on Friday October 6th. The family asks that donations be made in Bill’s name to Memorial Sloan Kettering. GRAHAM FUNERAL HOME 1036 Boston Post Road Rye, NY 10580 (914) 967-0129

Share Your Memory of
William
Upload Your Memory View All Memories
Be the first to upload a memory!
Share A Memory
Send Flowers