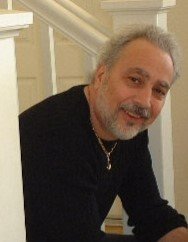 Donald George Miriello . . . a true original that arrived on the Manhattan scene on September 28, 1948 to Donald Anthony and Frances (Lombardino) Miriello.  His parents, both of Italian descent, had waited years for the arrival of what would be their only child.  He was worth the wait. He was a beautiful baby born into a bigger Italian family of cousins, many of whom were several years older.  He was cherished as an only child and the youngest cousin, and soon found his place in the colorful family life that exists only in the Bronx.

As a child, he was known for a mischievous streak.  Thankfully, it was mostly with a twinkle in his eye and a sense of fun.  Tales of throwing snowballs at passing cars and loosening salt shaker caps abound.  His arrival on the Manhattan scene didn’t claim him as a city boy.  At the time of his birth, his parents had a summer house in the White Mountains of New Hampshire, and it was there that Don spent his childhood summers.  New Hampshire summers transformed him into a “city” and “country” boy.

His cousins also made the trek northward throughout many summers, and a bond over the outdoors, the beautiful state of New Hampshire and the unique experiences of rural life were formed among the tight-knit family.  Unlike many Bronx boys, Don had actually shot a bear, gathered eggs from the chicken coop and played deep into the woods.

As a young man, he even married a New Hampshire girl, and although the marriage didn’t last, it produced a beautiful son named Damian . . . an only child, like his father.

So strong was the pull of New Hampshire, that in December 2002, he and his soon-to-be-wife, Jonna, purchased a second home on Dalton Mountain in the town of Dalton.  The property, set on more than 20 acres, featured a long, winding driveway that led to a brick home with breath-taking views of the Presidential Mountain Range.  It was the views that sealed the deal . . . and would later provide the backdrop to an amazing wedding.  Don would later say, “It was the best wedding I ever attended, and it was mine.”

Don and Jonna made the trek to New Hampshire for many years, undertaking a gradual transformation of the property.  After all, shouldn’t million-dollar views have a house worthy of the setting?  Don, always known for his love of great cars (he was among the first to have Acura’s NSX and was no stranger to quite a few top names), soon enlarged his reach to include three John Deere tractors.  He took great pride in his property and meticulously mowed and groomed the grass during each visit.  When winter came, a snow plow attached to a John Deere provided another handy grooming tool.  Don on a John Deer tractor was a common site during New Hampshire visits.

But New Hampshire wasn’t Don’s only love.  He was also an avid boater.  After receiving his first (small!) boat at the age of 12 – purchased from Sears & Roebuck, no less! – he was seldom without a water craft.  (An exception being a number of years when remodeling his beloved home took precedence.)  Although he had a love and an appreciation of well-engineered cars and boats, he wasn’t pretentious.  Indeed.  One of his favorite boats was an “old wooden” Viking boat that he cherished and meticulously maintained for many years.  The thaw of summer was the start of boating season for much of Don’s life.

Don later purchased a Magnum boat . . . an engineering marvel in the mind of many boaters . . . and lavished the same attention on its maintenance and upkeep.  He was a true boater at heart and his heart seemed to beat a little happier when he was on the Long Island Sound, sporting a nicely earned tan and feeling the salty wind in his hair.

As a young man, Don joined the Air Force, where he was stationed in Kansas, worked on top secret missile silos and even saw aerial combat in Vietnam.  He served honorably until his discharge in 1970.  His love of airplanes also found a place in his heart, as he earned his pilot’s license and in later years would regale new acquaintances with adventurous flying tales.

After his discharge from the Air Force, Don decided to use his GI bill to follow (somewhat) in his father’s footsteps by getting his beautician’s license.  Although his talent was real, he sought greater instruction, and began a daily calling campaign to the Vidal Sassoon salon in Manhattan to work as an assistant.  Perseverance won out, and Don was eventually granted an audience to show what he could do.  Don would always laugh as he recalled that his then-work was quickly dismissed, but he was offered a chance to learn as an assistant.  He took hold of the opportunity and began formal training in the Vidal Sassoon technique.

As his technique and talent blossomed, he chose to return to Westchester County, where he remained throughout his illustrious career. During his career, he studied among the top masters in Europe; traveled the world as the first International Artistic Director of the Aveda Corp.; coordinated hairstylist teams for Milan’s top fashion shows; owned two advanced hairstylist training schools, including one in Rome; owned what was once the largest independent salon chain in Westchester County; and founded The Best Little Hair Salon in Rye, a beloved fixture in the Rye area for more than 20 years.  He was a gifted and talented haircutter and colorist.

During his years spent in the Rye community, Don forged many great and rewarding friendships.  Work was never truly work.  Don would always say that he “missed” doing hair after four or five days away.  He loved his craft and enjoyed the audience it provided and the many varied and interesting things he learned as he spoke and visited with his clients.

Don was also known as a lover of great food and was quite the chef, himself.  Although he would say that he was more “peasant” in his cooking, he could easily create and whip up dishes and meals with barely a second thought.

His Italian heritage gave him a love of great Italian food, a fondness for Arthur Avenue in the Bronx and a love for the music of artists like Frank Sinatra, Andrea Bocelli and the like.

He was blessed with an adoring wife, Jonna Crispens of Bronx, NY; a loving son, Damian Miriello of Los Altos Hills, Calif.; and many, many, many wonderful cousins, family members, clients and friends.

Share Your Memory of
Donald
Upload Your Memory View All Memories
Be the first to upload a memory!
Share A Memory
Send Flowers