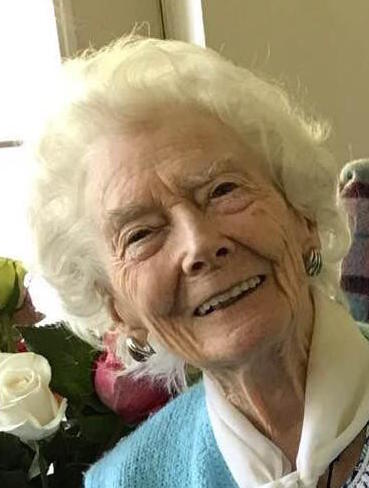 Terry Shannon passed away on August 30, 2019 at her home in Ardsley, NY. In her last days she was surrounded and supported by her children and the exceptional attention of her loving caregivers.

Terry was the youngest of three daughters born to Martin and Agnes (Meehan) FitzGerald residing in Riverside, N.Y., born in The Republic of Ireland, Agnes from Kiltyclougher, County Leitrim, Connacht, and Martin from Galway, County Galway, Connacht. Terry is predeceased by her two older sisters, Agnes (FitzGerald) Sullivan, and Dorothy (FitzGerald) Carey.

A graduate of Seton Academy, and The College of New Rochelle, subsequent to completing her education, Terry worked as a flight attendant for United Airlines. Her time with United was a source of pride as she stepped into adulthood with brave independence and her characteristic sense of adventure. Following World War II, Terry married Philip Mitchell Shannon, of Yonkers, New York to whom she was married until their divorce in 1979.

Terry Shannon will be remembered for her wicked quick tennis serve, and equally quick return of wit and verbal volley. She loved her friends, her children and her grandchildren with open arms and without reservation. The matriarch of her large extended family, she was beloved by her seven grandchildren who always found time to visit with her well into her old age.

The family will receive friends at the Graham Funeral Home in Rye, NY on Friday, September 6th, 2019 from 4:00 - 7:30 PM. A Mass of Christian burial will be held at Sacred Heart Church in Dobbs Ferry, N.Y. on Saturday, September 7th, 2019 at 10:00 am, interment to follow at Gate of Heaven Cemetery, in Valhalla, NY.

In lieu of flowers, please consider making a donation in Terry's name to St. Jude's Children Hospital, Ursulines of the Eastern Province, or one of your choice.

Share Your Memory of
Teresa F.
Upload Your Memory View All Memories
Be the first to upload a memory!
Share A Memory
Send Flowers