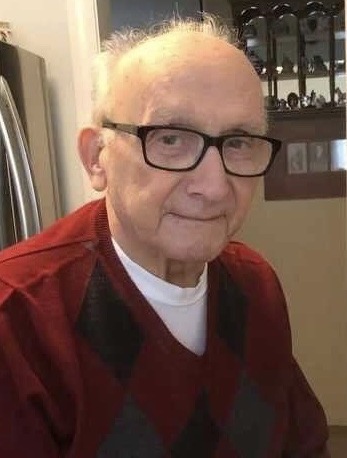 Please share a memory of Rocco to include in a keepsake book for family and friends.
View Tribute Book
People come and go in our lives and some leave lasting impressions. Dad (Rocky), of course, was one of those in my and my mother’s life. He was a role model to me as well as to many of his nieces and nephews. At these times you are only supposed to share the good memories and forget the bad. But there are no bad memories, not one. My mother, Barbara Sirani, my partner, Patti Gruber, and I are very grateful for all your well wishes, in these odd times, as we celebrate the 88 years that my dad was able to share his presence in this world. Rocky (Dad) and my mom have been lucky to have his community family on Garden Drive, and they were lucky to have him as well. He always had a Snickers Bar ready for the neighbor’s children (Lessie, Gianna and Bella Mazzilli). Rocky (Dad) was the youngest son of nine children. He was raised in an Italian immigrant family living on Elizabeth Street in Little Italy. He joins in heaven his parents, Francesca (Uccelini) and Antonio, his brothers, sisters and their spouses: Vincent (Alba), John (Rose), Tony (Marie) Ralph (Connie) and his sisters Mary (Hank Mariani), Millie (Nick Menegio), Josie (Al Parziale) and Terry (Bob Smith). He is predeceased by four Sirani nephews Junior, Tony, Anthony, and Michael as well as predeceased by nieces Frances and Diane. He is survived by Sirani nieces-nephews as well as their families: Joe, Robert, Joseph, Alex, Francine, Joanne, Annette, Carol-Ann (Goddaughter), Millie, Richie, Mario, Sally and Ralph Jr. Rocky (Dad) served in the Army near the end of the Korean War. He was stationed in Europe. Dad would always share the story how he went AWOL to get in trouble so he would be sent to fight in Korea. But his commander wouldn’t have it. Before joining the Army he worked at Gref Fabrics in New York City. Dad often told stories about hanging window treatments for the likes of Jackie O and the Gabor Sisters. Dad was a snappy dresser in those days. After his time in the Army, he met my mother, Barbara (Traver) in Chatham, New York. They were married October 31, 1959, 61 years ago. Dad was a fixture at the Traver family table. I know the first thing my grandfather Traver asked Dad in heaven was, “they could never shut up for 5 minutes, could they?”. Rocky (Dad) is predeceased by his father and mother-in-law, Spencer Traver/Dorothy Traver; his brother-in law Charles Traver, & sister-in-law Marnie (Fosby). He is survived by his Traver sister-in-laws Dorothea (Wheeler) and Beth (Barber) and his brother-in-law George. He adored his nephews Richie, Bobby, Al, Greg, Wayne, David (deceased), Todd and his niece Melanie (Goddaughter). Dad and Mom along with Uncle Ralph moved to Rye to be near dad’s sister Terry in 1965. He worked for ITT/Continental Baking for 27 years alongside his brother Ralph and his sister Terry. As my cousin Robert Smith shared a big delight for them, in the old days, was coming to visit Mom, Dad and Uncle Ralph to watch TV because they had a COLOR TV and to play board hockey with Dad. Dad was a great Rangers fan and shared the stories of his youth going to Madison Square Garden to watch the Rangers play. He loved the Yankees and passed that passion on to many of his nieces and nephews. He brought many of us to Yankee Stadium growing up. Rocky (Dad), his brother Ralph, Terry’s husband Bob Smith and cousin Robert took many trips on weekends to their favorite spots for hunting and fishing, sometimes all the way to Chatham – always deer hunting and never getting one. A great loss to my dad and our family was losing his sister Terry at the young age of 42. Dad we know you are with her now. Rocky (Dad) was a City of Rye Volunteer Fireman for many years. He served as Captain of the Poningoe Hook & Ladder company driving the Tiller. He retired from his active participation due to illness. Dad was very proud that he had helped arrange the old ladder truck being donated to the Fireman’s Home in Hudson, New York. Rocky (Dad) also had been a member of the Brassmen Drum & Bugle Corps of Harrison, NY. He joined his old pals Joe and Danny Marcone traveling to band competitions and marching in many parades. He really enjoyed that. As my cousin Robert shared with his family yesterday, “Uncle Rocky (my Dad) was the kindest, most thoughtful, and loving man you would ever know. Always positive and supportive. He was a backstop dad when other dad’s were not there. Especially to my cousins Robert, Carol-Ann and cousin Ralph. He would do anything for family. Now that is a role model.” Even though we no longer saw each other often, I will miss him dearly. His silly jokes, his smiling face. I guess God needed a break from all the bad stuff so He called Rocky home to cheer Him up. Rest in Peace my dear uncle and say hi to all our family, we will see them soon enough.” In lieu of flowers, donations can be made in memory of Rocco Sirani to Rye Town Park c/o Town of Rye for a memorial park bench and flowers that we can continue to visit in his memory. To make a donation online to Rye Town Park click the link for their PayPal Account list to the left and choose to make a payment to Rye Town Park. Specify the donation in the reference line “In Memory of Rocco Sirani Fund”. Donations can also be mailed to the attention of: Camille Meola, Community Liaison, Town of Rye, suite 302, 222 Grace Church Street in Port Chester New York 10573. Write in the check note section, Rocco Sirani Memorial Bench. Thank you for your kindness.
Monday
25
January

Share Your Memory of
Rocco
Upload Your Memory View All Memories
Be the first to upload a memory!
Share A Memory
Send Flowers
Plant a Tree