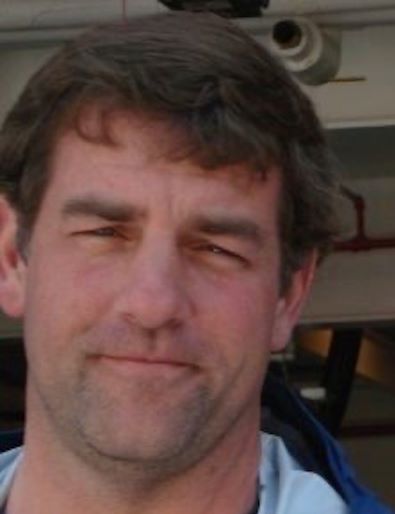 Please share a memory of George to include in a keepsake book for family and friends.
View Tribute Book
George Hogben died February 11, 2021 at Greenwich Hospital, after suffering septic shock. He was 53.   Born in New York City on December 12, 1967, he grew up in Rye, N.Y. and devoted his life to serving the community he loved.   In the 1970s, the Midland School faculty awarded two sixth graders, one boy and one girl, the “Citizen of the Year” award for outstanding leadership and extraordinary kindness. George Edward Hogben won that award, and his name was engraved on a plaque that hung in the school for decades. He played baseball in Rye Little League and ice hockey at Rye Country Day. He enjoyed being a Boy Scout and a member of the ROTC.   At Rye High School his senior year, George was voted October Student of the Month, runner-up Homecoming King, and class GO secretary. He was nominated for the Steffi Stiassni Memorial Award and received the Chase NBW and Gannett Westchester Newspapers Citizenship Award for outstanding leadership to school and community.   He was punter/place-kicker for the Section 1 Rye Garnets Football team which was undefeated in 1985 and was celebrated in a 1993 New York Times piece, “It’s Only the Game”. He trained at the Pat Dye School of Kicking at Auburn University in Alabama and was accepted to Boston University where he played football his freshman year. B.U. would feel too big for George, and eventually he returned home to finish his bachelor’s degree at Manhattanville College.   In high school, George began his lifelong work in marina management, first at Bonaventure Marine Services, where he learned the ins and outs. In 1992, he started American Marine and leased and operated a small boatyard on Milton Point. From 2004 to 2016, he transitioned to Assistant Waterfront Manager for American Yacht Club. He served as Boat Basin Supervisor for the City of Rye from 2016 to February 2020. George was also Properties Manager for the Town of Rye from 2012 until his death. As side gigs, he plowed driveways and hauled boats south in winter.   Known by many as “Chief”, he joined the Rye Fire Department as a volunteer right out of high school in 1988. In 2001, he became Volunteer Chief and served in that position for over a decade. On 9/11, he joined the emergency response in Manhattan, where he was assigned to the Millennium Hotel and assisted Tower Ladder 24.   George’s grandfather, George Joseph Hogben, settled in Rye in the early 1900s and was Rye’s general practitioner for decades, delivering hundreds of Rye residents. George’s grandmother, Margaret Loder, also a general practice physician and pathologist, founded and ran the pathology lab at United Hospital. George’s father and mother, a psychiatrist and a nurse, respectively, served the Rye community for 40 years.   Rescuing compromised and senior dogs was a cause close to his heart. Over the years, he was the doting owner of Rose, Oliver, Marley, Bear, Jax, Mabel, Sam, and more. He was a member of PETA and known for his continuous support of animal rescue organizations.   The City of Rye terminated his agreement as Boat Basin Supervisor on February 14, 2020. In several interviews with this paper, Mr. Hogben stated the City demanded his resignation “for failing to properly fill out a $95 invoice for a used part” that in the end he didn’t order. In follow-up conservations with the Mayor and the City Manager, they declined to elaborate. Marina slip holders and RowAmerica Rye members petitioned the City to reinstate him with close to 700 signatures, to no avail.   George Hogben was predeceased by his mother, Donna, in August 2017. He is survived by his 4-year-old daughter Jillian, his father George, his sister Julie, his niece Isabel, beloved cousins, scores of friends, and his rescue dog, Shep.   There will be a private funeral for immediate family and an outdoor memorial in June for extended family, friends, and colleagues.   The Friends of Crawford Park is planning a native garden in George Hogben’s memory, which will provide a beneficial natural habitat and serve as a sanctuary for all parkgoers. To contribute, go to www.friendsofcrawfordpark.org, click the “Donate” button on the homepage, and select “George’s Garden”..

Share Your Memory of
George
Upload Your Memory View All Memories
Be the first to upload a memory!
Share A Memory
Plant a Tree