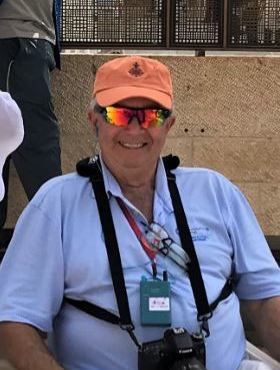 Please share a memory of Kenneth to include in a keepsake book for family and friends.
View Tribute Book

Kenneth J. Boucher, 72, of White Plains, New York, died suddenly on June 23, 2021. Ken was born June 16, 1949, in New York City to Alma and Joseph Boucher. He is survived by his beloved wife of 40 years, Elizabeth (Liz) Barnwell Boucher, his children Griffin Boucher and Ryan Elizabeth Chin (Greg), his sister Barbara Boucher Wells (Douglas), and numerous nephewsand a niece, all of whom will miss his kind, gregarious and generous nature.

Ken grew up in Rye, NY on the Westchester Country Club grounds. He graduated from Archbishop Stepinac High School in White Plains, NY and from Saint Leo’s College in Florida in 1971.  After graduation, Ken went to work in the family business, Ultima Sales Corporation, a commercial air conditioning sales and service business located in New York City. After the deaths of his uncle and father, Ken continued to run the business for several years until 2007.  Thereafter, Ken began a successful career in residential building and renovation in Westchester County. He also worked as a real estate agent for the Houlihan Lawrence office in Rye, NY.

Ken had many great loves in his life: family and friends, building and fixing almost anything, travel, his association with Westchester Country Club, and the game of golf.  Ken had an extraordinary gift of being able to build or fix anything in the home. Indeed, when friends or family had a repair to be made, their first call was to Ken, and he would usually fix it himself, or if he didn’t have the time, he would provide the best person to do the job. While serving as a member of the Engineering Committee at Westchester Country Club, Ken was instrumental in designing and installing a geothermal heating and air conditioning system for the Club, which has resulted in a greatsavings over the years.

Having grown up as a member of Westchester Country Club after his parents joined in the early 1960’s, Ken made lifelong friends there and his social life was centered around the Club. Combining his love for golf and outgoing nature, Ken could often be found at the Club’s golf practice facility, striking up conversations with his fellow members. As a result, Ken was affectionally known as, “The Mayor of the Driving Range”.

Ken loved being a congenial and generous host to friends and family. His Thanksgiving dinners are legendary. Why have four for Thanksgiving, when you can have forty? Ken and Liz would serve up not less than three turkeys to family and friends, including one from the deep fat fryer, for all to enjoy.

Whenever there was a social event at the Club, you could always expect to see Ken in the midst of it. In fact, you could usually hear him before you spotted him. He loved nothing more than having convivial conversation over dinner or a drink.

Ken will be missed by all who were lucky enough to know him and spend time in his company. It is said that when someone dies, there is a hole left in the universe of all those whoknew and loved him. No one will ever fill that hole in quite the unique way as did Ken Boucher.

In lieu of flowers, the family asks that donations be made to the Westchester Country Club Caddie Scholarship Fund, 99 Biltmore Avenue, Rye, NY, 10580, an organization strongly supported by Ken.

Abiding by Ken’s wishes, there will be a family service following his cremation.

Share Your Memory of
Kenneth
Upload Your Memory View All Memories
Be the first to upload a memory!
Share A Memory
Plant a Tree