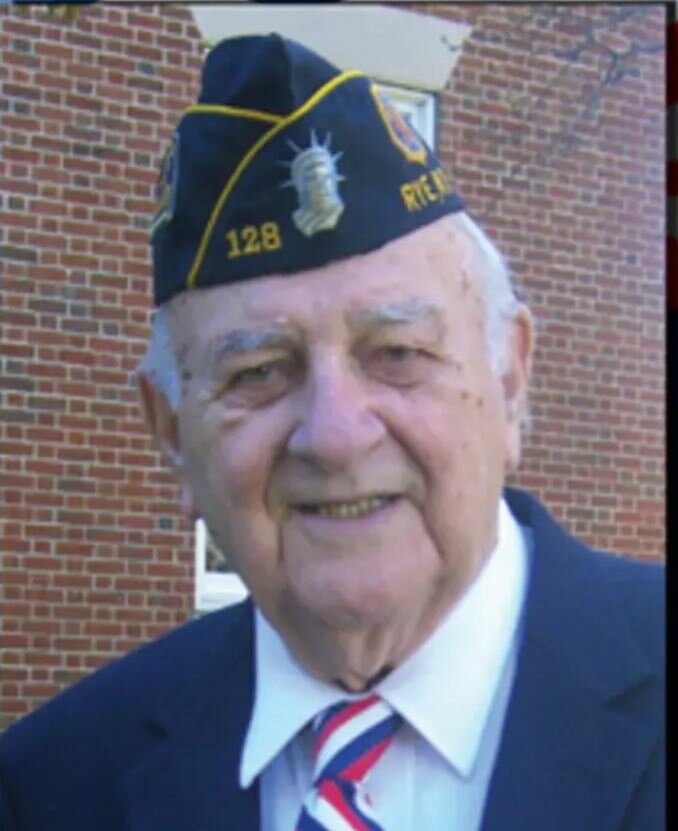 Please share a memory of Edward to include in a keepsake book for family and friends.
View Tribute Book

Edward (Ed) Thomas Dempsey, affectionately known to old-time family and friends as Sonny, passed away on March 8, at the age of 99, just a few months short of his 100th birthday.  His grandparents landed in Rye after emigrating from Ireland, living at Park Lane off Milton Road. His father, Edward P., was a carpenter working on a project on Long Island when he met his future wife, Ellen Veronica Purick from Port Jefferson. His mother and father were living with an aunt and uncle in Mineola when Ed was born on July 3, 1922, and immediately returned to Rye after the job ended. His father then built a home on Manursing Avenue and Ed lived in Rye the rest of his life. He was the oldest of five children.  Ed led an exemplary life both in the Armed Forces during World War II as well as in the community and was a wonderful son, brother, loving husband, father, grandfather and great grandfather.

Ed attended Resurrection Grammar School and Rye High School.  He was an outstanding athlete, especially in baseball, where he played third base, and track, where he set many records.  He continued to play baseball and softball for many years and later also found time to coach the Limerick Team in Rye’s softball league.  He enjoyed watching his children and grandchildren go on to play and then themselves coach.  Even at 99 years old, he enjoyed seeing his sons and grandsons play on the Hammerheads softball team.

The day after the attack on Pearl Harbor, Edward enlisted in the Army, with four of his friends.  He proudly served in the United States Army Air Corps from 1941 until being honorably discharged in 1945 when the war ended.  After basic training at Jefferson Barracks, Missouri, where the trainees lived in a tent city, he was ordered to Victorville, California, in the Mojave Desert where the Army Air Corps had constructed a new air base for training pilots and navigators. He was quickly promoted to Corporal then Sergeant.  Ed was initially assigned to the Fire Brigade, which stood ready to deal with air crashes.  Although he longed to be transferred to gunnery school, the Army sought to capitalize on his aptitude for mechanics and assigned him to school for mechanics in La Junta, Colorado, learning to build, maintain, and repair B-25s and then to Seattle, Washington to work on B-29s.  Towards the end of the war, he also served at other bases including Roswell, New Mexico and New York’s Mitchell Field and held many roles including as a trainer and a navigator.

Following the war, Ed returned to Rye, where he quickly became, as one newspaper recounted, “the heart and soul of Rye.” He married Joan Mary Brown, also of Rye, November 29, 1947, at the Church of the Resurrection. Ed and his father built his house on Harbor Terrace Drive, where Ed lived the rest of his life and would not leave. Their marriage lasted more than 63 years, until Joan’s death in 2011, after a long battle with Parkinson’s disease.

Edward worked for Rye’s Department of Public Works and then as an aircraft mechanic at Westchester County Airport.  In 1946, he joined the Rye Fire Department, first as a volunteer assigned to the Milton Engine & Hose Company at the Milton Road firehouse, and then as a professional firefighter in 1949 where he was proud to drive the Bull Dog Mack Pumper.  The two biggest fires he remembered fighting were at Playland and the American Yacht Club.  After 35 years with the Rye Fire Department as a professional firefighter, Ed was forced to retire due to age requirements in 1984 but continued to be active in the Fire Department for several decades and received the award for over 75 years of service.  To help support his family, he also worked for over forty years at United Hospital as a second job, driving the ambulance and working security.  Through his bravery in the Army and the Fire Department as well as at the Hospital, Edward saved numerous lives throughout his lifetime.

A beloved figure in Rye, Ed distinguished himself in service to both veterans and his community.  He served as president of the Rye Recreation Senior Club, a Boy Scout Troop No. 1 leader, and was a head usher and other positions for Resurrection Church, where he was a devout parishioner.  Ed also coached softball and was a coach and officer in Rye Little League and Babe Ruth League for over 20 years.  He thoroughly enjoyed coaching and loved teaching countless children how to play the game properly while making sure everyone had fun.  He was very proud of running the Little League Parade for several decades.  For his many contributions to the Rye community, Ed was inducted into the Westchester Senior Citizens Hall of Fame in 2003.

For three years, Ed was the commander of American Legion Post 128 and organized the Veterans Day and Memorial Day ceremonies at City Hall. He was honored with the Post’s Americanism Award and was also inducted into the New York State Veterans' Hall of Fame.

Friends and family will honor Ed’s life at Graham Funeral Home on Friday, March 11 from 4:00 to 8:00 PM.  A Mass of Christian Burial will be held on Saturday, March 12 at Resurrection Church at 10:00 AM.  The Mass will be livestreamed for those who cannot attend in person.  To view the livestream, click here. Burial will follow at Greenwood Union Ceremony.  In lieu of flowers, donations could be made to the Rye Seniors – Rye Recreation Center 281 Midland Avenue Rye, NY 10580 or Rye American Legion Post 128 – PO Box 128 Rye, NY 10580.

Share Your Memory of
Edward
Upload Your Memory View All Memories
Be the first to upload a memory!
Share A Memory
Send Flowers
Plant a Tree