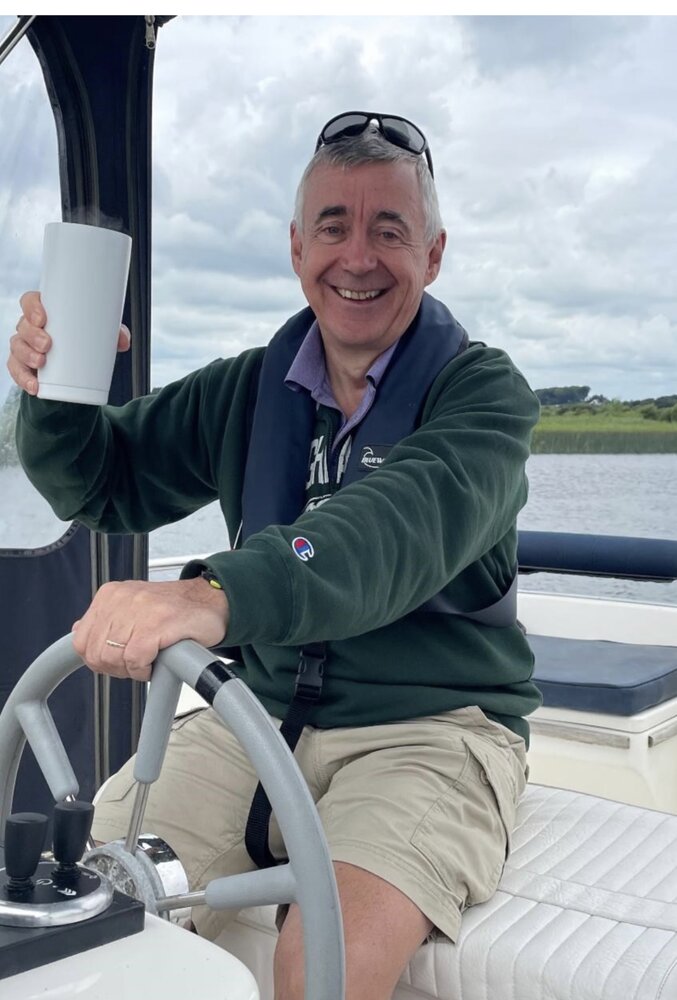 Please share a memory of Norbert to include in a keepsake book for family and friends.
View Tribute Book

Norbert Galligan, devoted husband, father, son, brother and friend, lived and loved with unsurpassed passion, exuberance and joy.  On April 12, 2022 Norbert, an avid cyclist, passed away after a biking accident on his beloved triathlon route in Greenwich Connecticut.

Norbert was born on January 2, 1959 in Dublin, Ireland, the eldest of Kathleen and Michael Galligan's six children. He is survived by his beloved parents, his five adoring siblings: Marie Smyth (Ciaran); Fintan (Lorna); Emer Litchfield (Conor); Declan (Sarah); Vivian (Louise), and his many beloved nieces and nephews.

Norbert’s spirit lives on most fervently in his adoring wife of twenty-two years, his Anam Cara, Cliona Cronin, and his two beloved sons, Cian, a junior at University of Binghamton and Conor, a senior at Rye High School.  Norbert unabashedly loved Cliona, Cian and Conor. He worshiped the ground they walked on, supported their every endeavor and proudly conveyed his joy in their accomplishments. Last November when Cliona received an award from the Rye Lion’s Club, Norbert expressed so eloquently his love, admiration and gratitude for his wife and sons. He was happiest surrounded by and cheering on Cliona and his boys.

Norbert met Cliona, the love of his life, on a sailing trip in 1997. They were a match made in heaven.  Married in June 2000, the couple, always up for adventure, moved within a year to Philadelphia with their newborn, Cian. They embraced life in America and settled in Wynnewood, PA where they welcomed their second son, Conor.

In Pennsylvania Norbert and Cliona discovered the joys of a tight-knit American community and forever relished the bonds and friendships they forged as they embarked on raising their young boys. In 2007 the family moved to Rye, New York. For Norbert and Cliona living in such a close community by the water was a dream come true.

Family life in Rye was idyllic. Norbert coached soccer, cheered the boys’ every event and supported Cliona’s tireless commitment to the Rye community and to all those in need. Wanting to expand the boys’ horizons, the family traveled extensively, initially focusing their adventures on the National Parks of America and in more recent years ventured to China, India, Iceland, Mexico and Europe.  Norbert and Cliona’s devotion to their extended families drew them back to Ireland at least once a year.  In 2021 they spent a week traveling around Ireland and Norbert was incredibly proud to show his sons their heritage. The family’s most entertaining and fun trips found them all piled in an RV - the last, a seven-day jaunt to Joshua Tree National Park, a trip inspired by Conor.

Norbert loved the outdoors. He particularly enjoyed sailing, hiking, skiing, and cycling – and even completed the Dublin City Marathon in 1981. Norbert developed a passion for triathlon life, competing in more than thirty events. Norbert was instrumental in organizing a local group of cyclists, who were like a second family to him. Norbert was the soul of the “Rye Playland Market Cycle Group” and the glue that held them all together. So many members of the group remember meeting ‘a friendly Irish guy’ on their first ride who treated them as if he’d known them forever. Rides were never the same when he wasn’t there. Whenever anyone was tiring or losing motivation, he would always say: “It’s only half an hour to go and it’s all downhill!” “It never was, of course,” recalls Simon Bradley, “But those kind words always made you feel that bit happier and brighter. He will never be forgotten and will be in our hearts every time we get on a bike. He made us all better people.”

Norbert’s career began with Allied Irish Banks (AIB) in 1977 based in Ireland. His love and affinity for relationship building within the bank led to a steady movement through the ranks. In 2000 he accepted a senior position based in Philadelphia, eventually moving with AIB to New York. For the past ten years he traveled the US successfully leading AIB’s marketing and business development efforts.

At the time of this writing Cliona, Cian, and Conor have received hundreds of messages detailing Norbert’s kind and generous spirit, his warm and welcoming smile, the twinkle in his eye, his buoyant sense of humor and his appreciation for life’s smallest moments.  Norbert lived his life with a deep sense of faith, gratitude and wonder in the goodness and beauty in the world – a faith reinforced daily by his steadfast devotion to his family, his joyful commitment to his friends and his sheer delight in living and loving every day.

He will be missed beyond measure, never forgotten and loved always.

A wake will be held Monday April 18th and Tuesday April 19th from 2-6 at the family’s home, 2 Robert Crisfield Place. A funeral will be held on Wednesday April 20th at 11am, Church of the Resurrection, Rye, New York.  The Mass will be livestreamed for those who are unable to attend in person.  Please click here to view the livestream.

For those that have stories of Norbert’s antics, fun photos, or any thoughts to share, please send them to memoriesofnorbert@gmail.com so the boys will have them in years to come.

In lieu of flowers, donations gratefully welcome at The Challenged Athlete.

Share Your Memory of
Norbert
Upload Your Memory View All Memories
Be the first to upload a memory!
Share A Memory
Send Flowers
Plant a Tree