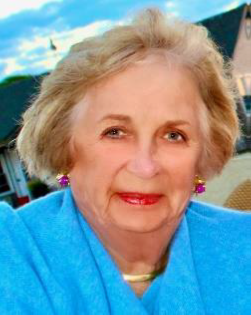 Please share a memory of Virginia to include in a keepsake book for family and friends.
View Tribute Book

Vero Beach, FL, May 5th, 2022 - Virginia Reid Powers of Vero Beach, Florida, passed away on May 2nd at her home in John's Island, surrounded by her sons, family photos, and an abundance of flowers and cards from close family and friends. Virginia was 87 years old.

Virginia, known to her friends as "Ginny" or "Gigi ", was born March 7th, 1935 to John and Beatrice Van Deventer. She was raised in Wilmette, Illinois, and later in Westchester County, NY. She attended Mount Saint Vincent College and also graduated from the Catherine Gibbs School in New York.

Ginny’s career as an executive secretary was interrupted by marriage in 1956 to the love of her life, Frederic B. Powers Jr., of New Rochelle, New York, who was serving as a lieutenant in the US Marines. The couple moved to a Marine Corps base, in Quantico, Virginia and then transferred to Camp Lejeune, in North Carolina, where Ginny gave birth to her first child, Christopher. After completing service during the Korean War, Fred and Ginny moved to New Rochelle, New York, where Fred went to work for his father's manufacturing business, the Rawlplug Company.

They had a wonderful marriage and together raised four sons- Christopher, who resides with wife Megan in Sarasota, Florida and Rye, New York; Jeffrey who resides with wife Eilis in Vero Beach, Florida and Larchmont, New York; Stephen, ( deceased ) whose wife Christina resides in Greenwich, Connecticut; and Frederic III, who resides in Greenwich, Connecticut and Vero Beach, Florida (his wife Lauren is deceased ). They in turn had children of their own, giving Ginny thirteen wonderful grandchildren and nine beautiful great-grandchildren who were her pride and joy.

Ginny and Fred were married for fifty years before Fred's passing in 2005. Beyond her love for her husband Fred, the highlight of her life was seeing her four boys working together at Powers Fasteners, their family business for over twenty-five years.

Ginny was also an accomplished sportswoman, an avid golfer and former golf chairwoman at John's Island Club. Before that, she was a competitive tennis and paddle tennis player and great golfer. Ginny was a member of Wykagyl Country Club, Winged Foot Golf Club, the John's Island Club, and Quail Valley Golf and River Club. She also enjoyed competitive Bridge and earned the title of NABC Master. She often went on Bridge cruises with friends to accumulate Bridge points.

Ginny was the matriarch of the Powers Family, her favorite role in life. She taught her children that faith and family come first. She was a true leader among women and an inspiration for her many friends who knew her best. She was very active working in charities, churches and clubs in both Westchester County and Vero Beach. She always showed sincere empathy for those in need, and loved helping whomever she could. She lived a long, full, contented life and was often heard saying "work without praise is precious", a nod to her philanthropic spirit.

After raising their children, Ginny and Fred moved to Vero Beach, Florida, spending summers in Larchmont, New York, where they had lived for over forty years. Ginny enjoyed giving back to her communities and dedicated a large portion of her life's time and resources to those most in need.

In 2017, Virginia Powers was awarded the Philanthropist of the Year award for Indian River County, Florida. She was also a founder and avid board member of the Float Hope organization in Vero Beach, Florida, a nonprofit organization that mentors and teaches “children without means” how to swim.

Virginia is predeceased by her parents, John and Beatrice, along with her older brother, John Jr, her sister Isabelle, and survived by her sister Beatrice Aselton, of Venice, Florida.

Family and friends of the Powers family are invited to attend a funeral mass of Christian Burial to be held at the Church of St Pius X in Scarsdale, NY on June 4th, 2022 at 9.30 am, and her internment that will follow at Greenwood Cemetery in Rye, NY.

A celebration of Ginny's life will follow at Winged Foot Golf Club, in Mamaroneck, NY.

In lieu of flowers, gifts in memory of Virginia Powers, may be made to Float Hope www.floathopenow.org of Vero Beach, Florida, and the Boys and Girls Club of Mount Vernon, New York www.bgcmvny.org.

Thank you to everyone for your well wishes and prayers. Ginny would be so happy to know. She loved people, she loved parties, she loved life, she felt blessed. God rest her soul, she will be greatly missed by many.

Share Your Memory of
Virginia
Upload Your Memory View All Memories
Be the first to upload a memory!
Share A Memory
Send Flowers
Plant a Tree