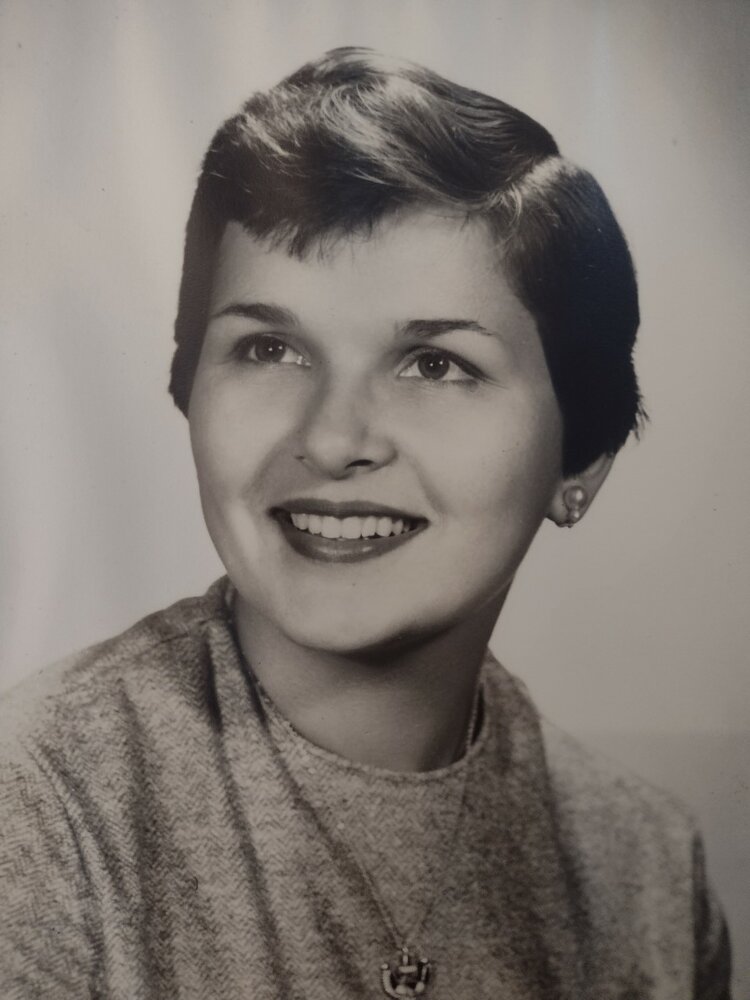 Alexandra Sara Toth Sax, 86, a reference librarian and devoted wife and mother, passed away peacefully June 11, 2022. “Lexie,” a resident of Rye, New York, since 1964, was born June 21, 1935, in Norwalk, Connecticut, to Rev. Dr. William Toth and Margaret Kalassay Toth. In 1957, she married Maurio Sax, who survives. Other survivors include daughters Dr. Athena Michael and Tamara Stuckey, and their husbands; and granddaughters Juliette Michael and Corrinne Stuckey. Her brother, Lt. Col. William Toth, preceded her in death.

Alexandra was accomplished both professionally and socially, loved by family, friends, and coworkers for her warmth, generosity, and helpfulness. She was a talented thespian, winning drama competitions in high school, playing the lead in a college production of the musical “Finian's Rainbow,” and, in the Rye Women's Club, performing various roles in productions written by the late Ion Snodgrass and directed by the late Pat Kirkpatrick. As her daughter Tamara grew up, Alexandra coached “Tammy” through multiple theater performances of her own. Likewise, her granddaughter Corrinne followed Alexandra’s lead, winning high school drama awards and performing in dance and theater productions as a current student at Loyola University, Maryland.

Alexandra studied at the school of drama at Syracuse University and history at Columbia University. She studied drama at the Shakespeare Institute in Stratford-on-Avon in England, where she worked and performed in the Globe Theater and did intensive studies of Shakespeare’s works. She earned master’s degrees from Manhattanville College (English literature) and the University of Texas (library science).

Alexandra followed in the footsteps of her other daughter, Athena, becoming a librarian. Alexandra rose to head reference librarian at the Mid-Manhattan branch of the New York Public Library. In response to the 2001 recession, she organized a job information center there, scheduling visiting speakers and resume-writing workshops. In 2003, she received the library’s

Maher Stern Award for outstanding service. Earlier, she helped a young Barack Obama, recently graduated from college, in his job search. He acknowledged her help during an American Library Association conference in 2005. “The librarian helped me find these lists of organizations, and I wrote to every organization,” Obama told an interviewer. “One of them wound up being an organization in Chicago that I got a job with.”

Over almost 20 years, Athena and Alexandra attended annual conferences of the American Library Association, where Alexandra was the Secretary for Ethnic & Multicultural Information Exchange Round Table.

Alexandra actively supported her Rye community. She started a program to teach English to Russian diplomats, the wives and children of Japanese businessmen, and the children of United Nation diplomats who lived in Rye. She served as president of the Evening Guild and the Rye Women’s Club, where she started a theater group. She was also active in the Rye Forum. She belonged to Rye Presbyterian Church and served on the board of the Rye Historical Society.

An avid traveler, she honeymooned with Maurio in Vienna, a city she returned to repeatedly, and loved visiting Budapest with her mother. In 1971, Alexandra accompanied her husband, daughters, and 27 high school students to the University of Nairobi, where they studied and toured Kenya and Tanzania, with the American Institute of Foreign Study. Later, she arranged family trips to Europe and Latin America and across the United States. She had many fond memories of traveling with her granddaughter Juliette throughout the Caribbean. In Japan, Alexandra reunited with her Rye adult Japanese English-language students. She represented the New York Public Library at a celebration of the founding of the National Library in Sofia, Bulgaria. In 2006, she joined a U.S. delegation that met with librarians in many universities and public libraries in China.

Alexandra, whose family immigrated from Hungary, was proud of her family’s tradition of public service. Her grandparents, Alexander and Elizabeth

Kalassay, founded the Bethlen Orphanage in Ligonier, Pa., after a mining accident in western Pennsylvania. Later, the orphanage turned into an elder care facility, which the family still supports. Alexander’s father, who chaired the history department at Franklin and Marshall College in Lancaster, Pa., had earlier been a minister at the Salem Evangelical and Reformed Church in Harrisburg, Pa. He also made broadcasts to Eastern Europeans for Radio Free Europe.

Her legacy will live on in our hearts.

Share Your Memory of
Alexandra
Upload Your Memory View All Memories
Be the first to upload a memory!
Share A Memory
Send Flowers
Plant a Tree