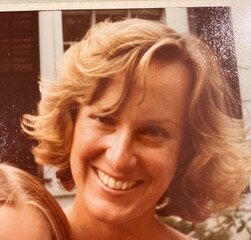 Please share a memory of Kathryn to include in a keepsake book for family and friends.
View Tribute Book

Kathryn Heiss Clarke spread joy and healing to the many lives fortunate to be touched by her kindness and generosity on the nearly 82 trips she took around our sun. From human family and friends to beloved pets, injured wildlife, tiny bugs and the countless saltwater animals who benefited from the energy and intelligence she devoted to improving our marine environment, Kath loved all life forms and was sister, mother and friend to all, in both good times and bad. She was as beautiful on the outside as the inside and her smile lit up every room. A gracious hostess and guest at social functions, she found great satisfaction in being a devoted companion and quiet supporter for those whom she loved. A capable and experienced yachtswoman who was a nearly lifelong member of American Yacht Club, she was a courageous adventurer who travelled the globe by passenger by cargo ships and van as a young woman and continued to serve as a capable navigator of all situations nautical, social, and political until Alzheimer’s disease began to gradually rob her of her considerable organizational skills, although she kept her cheerful spirit until the end.

Her passions included the environment, animal rescue, spirituality and space. She and others did not use these words at the time, but her contributions would be best described today as the accomplishments of the highly professional leader she was. When Kath was asked to join the Board of a nearly defunct Long Island Sound Taskforce, precursor to today’s Save the Sound, she quickly became its President and primary financial savior. Within about 5 or 6 years she built it into a dynamic organization with hundreds of supporters, both individual and corporate. The summer fundraising party became so large that it had to be moved to Stamford Yacht Club from American Yacht Club to accommodate everybody who wanted to attend. As a member of the Mamaroneck Coastal Zone Management Commission, Kath quickly became Chairperson and almost single-handedly wrote the first really excellent marine- enhanced and marine-dependent zoning regulations. New York State was so impressed by her work that she was asked to go to Albany to build a template for State-wide use by other coastal communities. Years later Kath performed an identical resuscitation with The Wainwright House. In partnership with her former husband Malcolm Dexter Clarke, Jr., to whom she was married from 1964 to 2004, Kath led these and other causes not only as a patron, but as a catalyst of progress through her own good ideas and influence on others.

Born January 26, 1941, on the Upper West Side of New York City, Kath passed peacefully at home on August 19, 2022, in Rye, New York. A longtime resident of Mamaroneck, New York, she had also been a resident of Melbourne Beach, Florida, and Sandisfield, Massachusetts, places she chose because of her interest in space exploration and the beauty of nature. She graduated from Bronxville High School in 1959, having played the trumpet, participated in school plays as prompter and led the marching band as the drum majorette. She attended Sweet Briar College from 1959 to 1961. When the college administration became dismayed by her involvement in the sit-ins of the early civil rights movement, she returned home to New York, where she ultimately received an undergraduate degree from The New School. Later in life she brought her sensitive observations and empathy to weddings and funerals for both people and animals. Throughout her life, yearning to go beyond the expectations society had for women in the era in which she was born, she jumped into action to ease injustice and suffering wherever she saw it.

Donations to honor Kath’s life may be made to Alzheimers Association, Save the Sound or Wainwright House. Please remember Kath by helping wayward people and pets find their way to safety and spreading kindness every day in ways big and small.

Share Your Memory of
Kathryn
Upload Your Memory View All Memories
Be the first to upload a memory!
Share A Memory
Plant a Tree