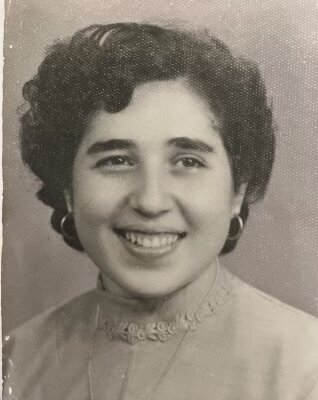 Please share a memory of Raffaela to include in a keepsake book for family and friends.
View Tribute Book

Raffaela Chiappetta was born on March 7, 1935 in the small town of San Fili, Italy.  She was a  beloved wife, mother, grandmother and friend. She passed away peacefully at her home Sunday, November 6.

Raffaela’s loves included her many close friends, grandchildren, and children, but most especially her devoted husband Francesco. Poems are written, novels are penned, and movies are produced about the kind of love Raffaela and Francesco shared. Their love story began nearly 80 years ago, when they met in elementary school after World War II, and since then Francesco has never left Raffaela’s side. They were married on December 1, 1956.

After emigrating from Italy to the U.S. in March 1958, Raffaela first settled down in Corona, NY, but eventually moved to Port Chester and finally, Rye. Rye has been her home for the past 54 years. In that time, Raffaela learned to speak English and started a family. Raffaela and Francesco had seven children – five boys and two girls. And from those children came 14 grandchildren, ensuring Raffaela’s legacy will live on for many generations.

Once her children had grown, Raffaela spent some time working at Avon, but later became a teacher’s aide at the Port Chester School District. Raffaela truly loved working with the children at the schools and spent many wonderful years there until she retired. They were some of her most cherished memories. She was also a member of the Rye Women’s Club and the first president of the San Fili Women’s Auxiliary Club.  Some of her passions included spending time with her husband and friends in Naples, Florida, playing cards, sewing, cooking, relaxing in the Sun, and attending Sunday mass at Resurrection Church.

The family will receive friends, family and loved ones at Graham Funeral Home on Thursday November 10, 2022, from 4:00-8:00 PM. A Mass of Christian burial will be celebrated at the Church of the Resurrection on Friday November 11, 2022 at 10:00 AM. The Mass will be livestreamed for those that cannot attend in person.  To view the livestream, click here. Mausoleum entombment to follow at St. Mary’s Cemetery in Rye Brook, NY. In lieu of flowers a memorial donation may be made in memory of Raffaela Chiappetta to the Port Chester/Rye/Rye Brook Ambulance Corps. (417 Ellendale Avenue, Port Chester, NY 10573).

Share Your Memory of
Raffaela
Upload Your Memory View All Memories
Be the first to upload a memory!
Share A Memory
Send Flowers
Plant a Tree